The Karbonn A5 Star has come out with a low price label although it has some of the most advanced attributes generally found in foreign branded smart phones in the country. 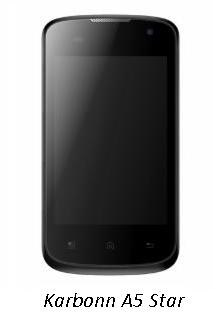 The Karbonn A5 Star smart phone is powered by a single core processor having a speed of 1.0 Giga Hertz which unleashes the power of the smart phone. The smart phone is endowed with a 256 MB RAM and an internal memory of 104 MB user that is extendable to a maximum of 32 GB through a micro SD card.

The Karbonn A5 Star is a Dual SIM smart phone with a capability of a dual standby feature offering the user with ease of connectivity to both 2G and 3 G networks. The A5 star smart phone is advantageous to the user since he needs to carry only a single handset rather than two facilitating the user with a convenience.

The Karbonn A5 Star smart phone comes equipped with a 3.2 Mega Pixels rear and primary camera that has geo-tagging, digital zoom and video and image recording features. The rear 3.2 mega pixels camera has a high resolution of 2048 x 1536 pixels that allows the user to enjoy the pleasures of photography by clicking razor sharp pictures and images and shooting videos at the same time. The front facing camera is a VGA camera and is used for video chats and video conferencing. 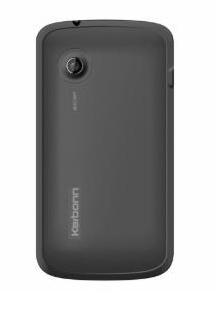 This smart device comes to the user with a 3.2 inches HVGA TFT multi touch display touch screen with a resolution of 320 x 480 pixels and supporting 16 million colors lighting up the screen with myriads of absolutely clear and vibrant images on the screen.

The Karbonn A5 Star smart phone uses the Android 2.3 Ginger Bread version of the Operating System that makes the smart phone totally functional and providing the user with an easy access to the extensive applications available to the user on the smart phone.

The Karbonn A5 Star smart phone has a broad spectrum of connectivity features spanning from providing support for 2G and 3G networks, Wi-Fi connectivity for faster connection to the internet, Blue Tooth for connecting with other networks and users, a USB port, GPS with A-GPS, a Browser for surfing the internet and phenomenal 3G data speed.

The Karbonn A5 Star price in the country has been pegged at Rs. 3500 approximately for the hand set which is considerably low and is within the reach of the people who have fetish for using smart phones.

This post is written by our Guest Author Vinnit Alex

Vinnit Alex is an expert author. Who writes on subject of technology article as mobiles, laptops and currently working with popular online shopping portal for helping people online.
0shares